As the project grows, the number of dependencies used in the project grows too. It’s very crucial to maintain them to have a state-of-the-art product. There is no way in Android Studio that can manage these updates for us. You have to do it manually. Usually, the process involves checking if a new dependency version is available, checking what’s new or reading changelogs, and then bumping the version and creating a PR.

We were doing exactly the same. It was a tedious task for us. That’s when I decided to automate this process. During research I got to know about Dependabot - version update system. This article is about how to automate dependency updates using Dependabot and how to handle its limitations.

Dependencies allow us to include external libraries, local jar files, or other library modules into our project. No need to add actual code files or jar files into your project. For example, to handle network calls, there’s no need to write your network layer, instead one can use Retrofit to enrich your app’s network layer. The Gradle build system makes it easy to add such external binaries or other library modules into the project as dependencies

Managing dependencies is crucial for any project. Dependencies can vary depending on the size of the project, especially those with a large number of them spread in various modules. The important part here is to keep them up to date to avoid outdated usage or technical debts. These technical debts are easily neglected which costs a lot later.

How to keep dependencies up to date?

The traditional way to keep them up to date is to keep track of each dependency manually and update them whenever needed. You have to be very careful before updating the dependency. It’s critical to read changelogs and then update them to avoid unwanted results. Doing it manually is a tedious job.

The best way is to automate this process so that whenever there is an update available it will get updated automatically providing all the required information developers need to know to update the dependency. Github recently announced Dependabot - version update system, which does this.

What is a Dependabot?

Dependabot is a version update system that provides a brilliant way to keep your dependencies up to date. Dependabot does the following things,

That’s it. No further set up required. However, it won’t work until a configuration file is added to the repository. Create a dependabot.yml and place it in the .github folder at the root of your repository (.github/dependabot.yml)

Dependabot scans for build.gradle or a settings.gradle files inside a repo, then scans outdated dependencies and creates PR. However, Dependabot isn’t that smart. Dependabot’s Gradle support is limited and is still in beta.

This is a workaround that is not properly documented anywhere in official documentation but this is provided by the developers as a part of this Github issue. Follow these steps to fix the issue: 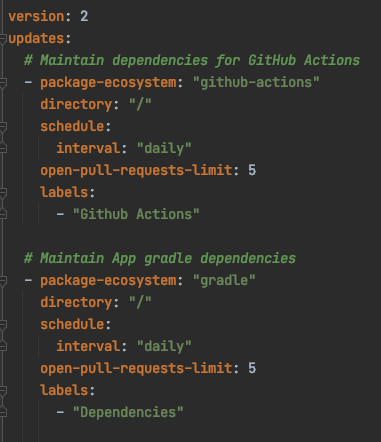 To automate dependency updates, Dependabot is an amazing tool and I believe that Dependabot will become an essential tool in the Android developer’s community. However, the Gradle support by Dependabot is limited as compared to Maven when dependencies are not maintained in build.gradle or settings.gradle. If the dependency versions are not maintained in these two files, you can tweak your gradle files in a way that dependabot can parse them and fetch the dependencies. Don’t hesitate to give it a try and leave feedback so we could see it coming out of beta sooner.

Special thanks to Sameer Kulkarni